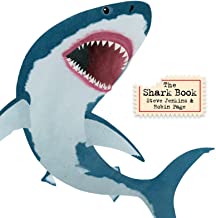 It may be Dolphin Awareness Month, but today we are looking at sharks! The Shark Book has it all: detailed (and beautiful) illustrations to scale; maps, charts, and a bibliography.  Among the pages of sharks, comforting facts (shark attacks are rare, and fatal shark attacks are even more rare), alarming facts (many species of sharks are endangered), and Jeopardy!-worthy facts (a group of sharks is called a shiver) are presented in a pleasing design and context.  A human form is included on each double page spread to show relative size of each creature; some sharks are large enough to swallow a human (that one was prehistoric – whew!), and some are small enough to fit in the palm of a human hand.

Jenkins and Page are favorite authors and when they collaborate, they are unbeatable.  All of their books are essential titles for an elementary library nonfiction collection. Prep your students for this summer’s Shark Week by getting this one on the shelf right away!

Fiction Pairing: I Survived: The Shark Attacks of 1916 by Lauren Tarshis

PBS Learning Media has a wide variety of resources and videos about sharks and other marine life: https://idahoptv.pbslearningmedia.org/search/?q=sharks